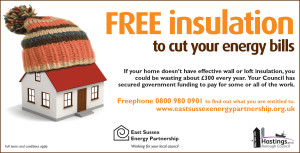 The East Sussex Energy Partnership encouraged homeowners to install energy-saving measures such as loft and cavity-wall insulation and renewable technologies such as solar panels. Run by Climate Energy Ltd on behalf of four local authorities, the Partnership publicised the availability of government-funded grants to pay for these installations.

In my role as Account Director with PRG, I lead all marketing communications for the East Sussex Energy Partnership. My extensive hands-on involvement included advertising copywriting and, working with graphic designers, the shaping of advertising creative.

The advertisement focused on the energy-saving measure of broadest appeal, insulation. It was important to make clear, at a glance, that insulation was available free-of-charge, easy to apply for, and easy to install. The creative solution was a simple but striking image of a house wearing a woolly bobble hat, with the headline ‘FREE insulation at the drop of a hat!’

The ad’s secondary message, ‘cut your heating costs,’ clearly spelled-out the benefit, with the reassurance that ‘thousands of people qualify’ for a grant. The ad was signed-off with the line ‘Working with your local council,’ accompanied by the four local authorities’ logos, to differentiate the Partnership from less reputable installers.

Within four months the East Sussex Energy Partnership had 2,700 installation jobs lined-up, with a value of £370,000. The scheme was such a success that it was awarded an increased budget, in competitive tenders against other local authorities, for the following year. The Government Office for the South East referred to the Partnership’s marketing and advertising as an example of best practice.