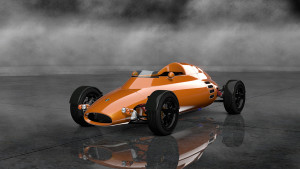 Gordon Murray, the legendary designer of racing cars and road cars, very kindly sent me a postcard after seeing this story about his Rocket sports car. One side of the card showed a photo of another of his creations, the McLaren F1 supercar; on the other side, Gordon wrote “The article on the Rocket read very well indeed – I’m glad you had fun driving it!” This story was published in Motor Trend in the USA and five other automotive magazines around the world.

One ride in the Rocket, a radical new 1+1-seater, will change forever the way you think about sports cars. Don’t worry that this car’s engine displaces only 1002 cubic centimetres, or that it has no doors, no spare wheel, no radio, no heater, no luggage space, no proper windshield, and no roof to protect you from wind or rain – none of this matters a damn, because its cockpit fits like your favourite pair of jeans, its controls are exquisitely precise, its grip on the road is relentless, its engine revs urgently to 12,000 rpm, its sound effects are glorious, and it’s called Rocket because it goes like one. As the closest thing there is to a road-legal formula racer, the Rocket really is the ultimate driver’s car.

This unlikely vehicle owes much to the fertile mind of Gordon Murray, the former Brabham and McLaren Formula one designer and technical director of McLaren’s “ultimate” road-car project. Since the early ‘70s, he and millionaire sports-car racer Chris Craft had talked wistfully of creating a road car, lean and pure of purpose, which “goes back to the power-to-weight ratio of Colin Chapman’s original Lotus Seven.” Last summer, they finally turned that dream to reality buy establishing the appropriately titled Light Car Company at premises in the rural English town of Saint Neots, near Cambridge.

The company’s workshop is unimposingly small, but in design philosophy it thinks big: Except for the engine, all major Rocket parts, including a unique transaxle, have been specially designed and fabricated. Greater use of proprietary components would have reduced the $55,000 price tag, but also would have forced up the kerb weight by as much as 40 percent.

By refusing to compromise – and by trusting that enough wealthy car lovers will buy an exhilarating toy almost regardless of price – Murray has kept the Rocket to 880 pounds, barely one third the weight of a Honda Civic. The chassis is a multi-tubular design whose skeletal frame runs either side of you in the cockpit; the stressed front and rear bulkheads are made of shining aluminium alloy panels, hand-welded (like the all-alloy suspension uprights) with loving precision; the tiny fenders, kept black to emphasise that this is an open-wheeler, are constructed of naked carbon fibre; and the bodywork, with its various sections held in place by racing-style metal clips and Dzus fasteners, is shaped from fibreglass-reinforced plastic.

With a stubby nose, bulging waist, and rounded rump, the Rocket’s styling evokes late-‘50s Grand Prix racers, particularly the Cooper, but Murray says he intended only “a minimalist look.” The shape, he explains, “just wrapped itself around the mechanicals and the cockpit.” The car looks best with the driver’s headrest in place, but to allow a passenger on board, it must be removed. It’s also possible to lift off the nose cone, which hides the front-mounted radiator, and the tail cover, which hides the best bits of all – that purpose-0built rear transaxle, designed and developed in Los Angeles by Formula One and Indy Car transmission expert Pete Weismann, and a transverse all-alloy engine that rowdily combines small displacement with big output.

Being a fan of high-revving knuckle-whitening two-wheelers, it seemed only logical to Murray to equip his car with Yamaha’s FZR powerplant, a liquid-cooled four-cylinder four-stroke unit with twin overhead cams, five valves per cylinder, and spectacular volumetric efficiency. Breathing heavily through four 38-millimetre Mikuni carburettors, this usually punches out 125 horsepower, but for the Rocket its inlet restrictors are removed, letting peak output soar to 143 horsepower at 10,500 rpm. The redline, for those prepared to risk hearing impairment, is another 1000 rpm higher.

From the driver’s seat, the Rocket seems faster still, partly because there’s no insulation from the great outdoors, partly because there’s a relentless assault on your eardrums. At low revs, the engine is unmistakably of motorcycle origins, burbling and thrummy with a syrupy-thick exhaust note, but from 4000 rpm it has a deeper tone, and by 7000 there’s a demented scream, hard-edged and metallic like a sharply tuned competition motor.

You can see the front suspension wishbones flexing furiously up and down and the tyres pattering on the asphalt, but can’t hear much road noise; you can feel your cheeks turning florid and your hair being swept back, but can’t hear much of the wind – these sounds are drowned out by a raw mechanical commotion, a confusion of body murmurs and gearbox clunks, transmission whine and induction roar, exhaust snort and – “Yaaahooo!” – passenger approval. At high speed and high revs, the whole vehicle is alive and vibrant, tingling and trembling and blurring the images in its exterior mirrors, the driving experience so vivid, so exhilarating, so physical, that you fear it might eventually make an omelette out of your brains.

If you tire of all this excitement, the Yamaha’s computer-controlled “Exup” exhaust valve enhances engine responsiveness at low operating speeds. Although maximum torque of 77 pound-feet isn’t developed until 8500 rpm (which in first gear gives 50mph!), the engine is acceptably well mannered above 2500 rpm,, and pulls with respectable willingness from 3500. But let’s face it: To drive the Rocket the way it’s meant to be driven, to make the most of an oversquare engine whose short stroke favour power over torque, you have to keep it singing the high notes. And that means you can indulge yourself, because the five-speed gearshift, which requires only small flicks of the wrist, is the quickest you’ll find outside a race car.

The short, metal-capped shift lever, attached to the right-hand side of the spaceframe at about elbow height, move through a one-back/four-forward gate. As with a race car, first engages with a clunk and the straight-cut gears rattle and chatter. High revs allow clutchless upshifts, but downshifting isn’t always so convenient: Instead of block-changing in one smooth move, for example from fifth to second, you must work your way, clickety-clickety-click, through the box. You might also wish for a dashboard read-out to confirm which gear is selected, because the position of the lever gives no clue. (Neutral, which is placed between first and second but difficult to select when moving, is confirmed by a green dash light.)

The tailor-made Weismann transaxle, which largely accounts for the Rocket’s steep price, sits behind the Yamaha gearbox, driven via chain and sprockets by an output shaft. Only 14 inches long, it incorporates a limited-slip differential, reverse gear, and second final-drive ratio that raises road speed in fifth from 13 mph/1000 rpm to 17 mph/1000 rpm. (But yes, it’s still gloriously noisy.) A separate lever near the driver’s right knee, which we found reluctant to engage, selects high or low ratios (which you can engage on the move) and reverse (which you can’t).

The transaxle, like the engine, is a fully stressed member, and serves as a mounting point for the rear suspension. Double wishbones are employed at both ends, with coil springs over adjustable tubular dampers. Anti-roll bars aren’t considered necessary. The tyres are relatively slim 195/50/VR15 Michelins, and many of the bushings are rubber, so the ride is surprisingly compliant.

This doesn’t noticeably compromise roadholding, at least not on smooth surfaces: Going as fast as a dry, public road allows, the Rocket keeps its grip. You might get the tail to wag when accelerating hard through second-gear turns, and you need to be gentle with the throttle in the wet, but corrective steering lock is easily and effectively applied. The steering’s not quite as fast as you might expect, with 2.5 turns lock to lock, but it’s light, precise, and delightfully responsive. Turning into a corner, you can pick a spot, any spot, as your desired apex, and you will clip it neatly. Beware, however, the uneven road surface: At high speeds, the car begins to assume a will of its own, bump-steer significantly diminishing accuracy of control.

The accelerator and clutch pedals also reward a delicate touch. But the brake pedal, which at a standstill feels to have almost no movement at all, is reassuringly firm and progressive at speed. Oh, and the brakes are fantastically strong, but you expect tat: After only a few hours with the Rocket, you come to take for granted its dynamic excellence. If you’re prepared to keep working with the gearshift, this four-wheeled superbike will run rings around almost anything else on the road.

Afterward, when the roar of the engine has vanished into the air and the adrenalin has all dried out of you and left you alone, you realise that the Rocket, more than just a purist’s plaything, is an emotional high: It makes you grin so much your face aches. It brings you that exalted sense of achievement found only after surfing or racing or flying or whatever it is that gives you the biggest buzz, that feeling of having really made something of the day.