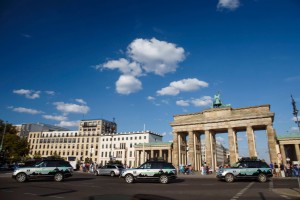 Driving deep into Germany after passing through France, Belgium, and the Netherlands, we have reached Berlin – where the destruction of the Soviet-built Berlin Wall in 1989 allowed east to meet west, just as the Silk Road first connected east and west more than two thousand years ago.

We entered Berlin after motoring 350 miles in a day from the city of Dῡsseldorf, where the delta of the River Dῡssel flows into the Rhine. Crossing the Rhine on a quiet Sunday morning, our seven expedition vehicles nosed down a steep concrete ramp onto a small ferry which, after waiting for a long barge to glide past, chugged slowly to the opposite bank. The river’s fast-flowing waters, black and seething, reflected the darkness of the heavens.

One hundred miles further east, the gloomy grey sky turned to a bright blue and decorated itself with fluffy white cumulus clouds. Under a shining sun, our three Range Rover Hybrids and four Land Rover Discoverys loped along the autobahn contentedly at 90mph. Summer-time and the living was easy.

Driving at high speeds and looking ahead, it’s easy not to notice the look-out tower and concrete checkpoints standing abandoned to one side of the autobahn near the city of Helmstadt. It was here, from 1945 to 1990, that the Helmstadt-Marienborn border crossing – also known as Checkpoint Alpha – connected the genuinely democratic Federal Republic of Germany in the west with the ironically-titled German Democratic Republic in the east. Slicing a laser-thin line through the Iron Curtain, the autobahn here was open only to official military traffic from NATO countries heading to to west Berlin. I last crossed this border in 1977, an excited child in the back seat of the family Saab 99. While the passports of myself, my parents and my sister were taken away to be photocopied, with deliberate slowness and we imagined page-by-page, my Dad exchanged some of his RAF badges for an East German guard’s Soviet-looking cap.

Later on in our adventure, we will see other countries that were also swallowed-up and later spat-out by the Soviet Union – Poland, the Ukraine, Kazakhstan, Uzbekistan, and Kyrgyzstan – as well as driving through Russia itself. We will next trace a route east and south from Berlin through Poland and the Ukraine, heading towards the Black Sea and the Crimean Peninsula.