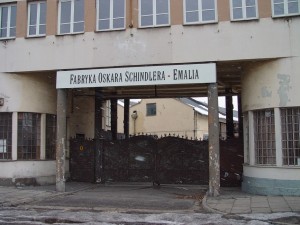 It would be easy to gloss-over my brief visit to Kraków with talk of its picture-postcard streets and majestically grand buildings. But it would also be wrong. There is a dark side to Krakow, dark and disturbing. The Polish city so popular with tourists because of its architectural beauty has a profoundly ugly history.

We were reminded of this, and plunged into stunned silence, outside the black iron gates to a former enamelware factory not far from Kraków’s historic centre. This was the entrance to the workshops that inspired Schindler’s List, the Steven Spielberg film about factory owner Oskar Schindler during the Nazi occupation of Poland in the Second World War. Schindler, you may remember, had a deliberate policy of employing Jews in his factory because he knew that if they were seen to be useful – the factory made pots and pans for the Wehrmacht – they might be spared from being shipped to concentration camps and death camps.

Adjacent to the closed factory gates, an office building looks out onto the street through windows divided into hundreds of small panes. Staring out at you from these panes are hundreds of little black-and-white photos, the faces of many of the Jews Schindler saved. In all, he probably helped as many as 1,200 escape gruesome fates in camps such as Belzec, Plaszow and Auschwitz.

So many, many more were less fortunate. From Krakow alone, approximately 68,000 Jews were forcibly moved from their family homes, most driven out of town and 15,000 crowded into a ghetto behind high walls shaped like gravestones. Later they were shipped like cattle to the camps where they died of starvation or disease or were gassed in chambers.

In contrast to this horrible history, the original Jewish Quarter of Kraków, which had flourished before the occupation of the Nazis and fell into disrepair under subsequent Soviet occupation, has been brought back to life – but its gentrification seems inappropriately Disneyesque. Here we now have a film-set-style theme park with cafes and restaurants cashing-in on the Holocaust and tour operators running trips, in the sort of jolly little Dotto trains usually seen at the seaside, to Auschwitz. None of the trippers I saw returning, however, looked in the slightest bit jolly.

Yes, Krakow is stunningly beautiful. Yes, the cafes with tables set outside in grand plazas look like the perfect place to sip beer and people-watch in a summer evening’s lingering light. I had half-expected all this. Unexpected was the profoundly unsettling memory I take away from the place of those dark factory gates. Gates that haunt you with thoughts about mankind’s ignorant hostility to people who are different or in a minority. Thoughts of man’s inhumanity to man.