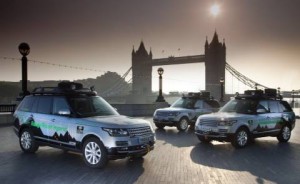 The first full day of our adventure dawned with the sun rising quickly into a silvery haze over London. Britons were still climbing from their beds as our seven expedition vehicles threaded their way through quiet city streets from a hotel in Wandsworth to a photo-shoot location near Tower Bridge.

Looking out from our vehicles, we saw the earliest commuters scuttling along uncrowded pavements towards Undergound stations and workday routines. As we passed, in this city famous for its inspiring sights, many stopped and stared: three Range Rovers and four Land Rover Discoverys, all silver and all running nose-to-tail – and all bedecked with ‘Silk Trail 2013’ decals on their flanks, a map of the expedition’s route on their bonnets, and spare wheels and jerry cans on their roof-racks. We looked like we were going boldly where no commuter has gone before, and the commuters looked back with a mixture of bewilderment or approval. The driver of a red double-decker at a bus-stop agreed to wave us all past rather than pulling out in the middle of our convoy – then leaned out of his window, smiled widely, and yelled: “You stick together – you don’t want to get lost!”

We photographed the three prototype Range Rover Hybrids on improbably neat paving tiles at the foot of City Hall, careful not to leave behind the tyre marks that would incur a big cleaning bill. With Tower Bridge as the backdrop, Peter Robain snapped the stills, Brad Lawson recorded video footage, and throughout it all joggers blurred by with sideways glances and pained expressions. On one side of our photo location, the river Thames flowed by, scenting the air with muddy saltiness; on the other side, modern glass-and-steel office blocks loomed over us and reflected the sun, shining examples of capitalism.

Images captured, we climbed back into our three Range Rovers, rejoined the four Land Rover Discoverys, and worked our way slowly through the now-heavy traffic towards the South Circular. To the Germans in our group, the South Circular might have sounded promisingly like a purpose-built orbital road, but Londoners know only too well that it’s nothing more than a collection of faded road signs sharing the same road number and pointing in approximately the same direction. When that direction lead at last to a motorway, and then England’s south coast, we all relaxed. It was an easy canter to the Channel Tunnel, easier still along the less busy autoroutes of France and Belgium. For two hours we sailed quietly past endless acres of farmlands, the landscape so flat that it could have been a chunk of Norfolk that had broken off and floated away.

Tonight we are in Brussels and tomorrow we head to Dusseldorf, Germany, with some off-road driving to look forward to at the premises of Land Rover Experience Germany, the expedition specialists who have plotted our 10,000-mile route to Mumbai.