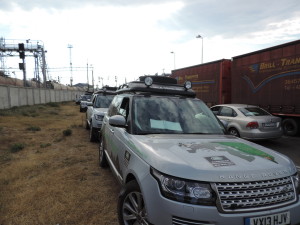 The narrow strait of water between the Ukraine and Russia, the Straits of Kerch, can be crossed on a car-ferry in just 20 minutes – but then you drive off it, on the Russian side, straight into a compound like a prison camp where you soon fear you might be incarcerated for days. This is No-Man’s Land, where your path is blocked by a series of barriers and unsmiling uniformed officials, and where you wait, and you wait, and you wait, to find out whether or not you will be permitted entry into Russia.

Everything in No-Man’s Land is cold and grey: the grey concrete road leading to the lowered barriers; the grey concrete walls, topped by barbed wire, that pen you in; the grey metal pylons and high gantries holding CCTV cameras that watch you from every angle; the giant grey gasometers outside the compound walls on one side and the cargo train on the other side sitting in the grey haze of its own diesel fumes; the grey potholed tarmac parking area outside the low-lying grey concrete office where your paperwork is checked for the third time by people with grey faces and grey jobs.

Human contact here is made mostly through small, square windows opening to officials’ sentry boxes or offices. One of these windows is set so low that you have to kneel down, the concrete hard beneath your knees, to pass documents through it. While I was prone there, watching an official scrutinise pieces of paper upon which my continued journeying depended, expedition leader Hans Hermann Rothe strolled over and whispered, only half-joking, “You look like you are praying.”

Wariness of Westerners remains strong in Russia and an entry process designed to be complicated and intimidating is even more so if you’re part of a convoy of seven vehicles laden with cases, tents, sleeping bags, food provisions, cameras, laptops, spare wheels, jerry cans, radios, and BGAN satellite transmitters. Progress was slow, measured by the sound of documents being shuffled and filed and the thump-thump of official stamps into ink-pads and onto paperwork.

Refusal of permission to enter was delivered much more quickly. The expedition’s medic, Emile Waite-Taylor, was halted at the first barrier and sent back on the ferry to the Ukraine. He would face a five-hour taxi  ride to the nearest town with an airport, Simferopol (near Sevastopol), then a solitary wait of three days for his post-dated visa to become valid before flying to Astrakahn in the east of Russia to rejoin us.

From my kneeling position I watched as my passport was scrutinised for the third time since entering the compound, saw it scanned, then witnessed the official, whose blouse-badge named her as Olga, take hold of my customs entry forms with both hands, tear them up, and throw them in a bin. Without looking at me, she passed through the window new forms to be filled-in. In duplicate.

New paperwork duly completed, Olga studied the car insurance form which had a long list of people’s names on it but not mine. At times like this you do indeed pray, for work-shy officialdom or lack of attention to detail. But Olga spotted the omission and seized upon it. One of the expedition’s leaders, Dougie Dale, showed his Land Rover business card and suggested he could add my name (and others’)  to the document by hand. Through this tricky negotiation the Russian-speaker in our team, Arthur Sebazungu, patiently translated. My name and others’ could be added, Olga conceded, but only if the amendments to the document were verified by an official company stamp. Dougie, who has been to places like this before, just happened to have a company stamp on his person. This was thumped down onto the altered insurance document with appropriate solemnity and Olga seemed satisfied. She thrust her arm through the little window towards me and her hand relinquished its grip on my passport. I was to be allowed in.

An hour or so later, when we had been inside this compound for six hours and were at last readying ourselves to drive away, the message came through that we couldn’t leave after all. Olga had been over-ruled. The amended insurance documents were not acceptable. We were directed towards another small Portakabin inside the compound, where we formed another small queue, filled-in more forms, and were relieved of a quantity of Roubles to the benefit of a Russian insurance company.

When the last barrier between No-Man’s land and Russia finally lifted, the sense of relief was short-lived. It wasn’t long before the last vehicle in our convoy was tailed and pulled-over by a police car. We didn’t know it then, but Russia would have more surprises in store.