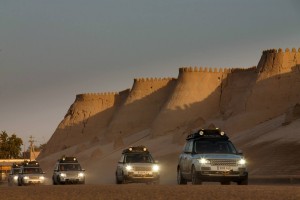 She had a pleasant enough face until she narrowed her eyes, fixed me with an accusing stare, then demanded: “Do you have any tablets for mental illness?”

She paused almost long enough for me to give a wrong answer, then added helpfully, “Because they are illegal in this country.”

An Uzbekistan customs official, she was rummaging through my wash-bag at the time of the question, her hand turning over its contents and delighting in the feel of a foil sheet containing pills. The last time I checked the small-print listing the side-effects of Paracetamols, however, there was no suggestion they might incidentally act as a fix for insanity.

Just as odd as the question demanded of me was the fact that this customs search was being made not on the entry to Uzbekistan, but on the exit. You’d have thought that if I was mad they’d be glad to get rid of me. But five days in Uzbekistan had been more than enough to learn that, though the Soviets have gone, Soviet-style authoritarianism lives on. This country’s government represses political opposition and exercises its authority with uniform-wearing, camera-spying, gun-toting zealousness.

Progress along main roads in Uzbekistan is obstructed every couple of hours, sometimes more often, by lowered barriers and police checkpoints. At the smaller of these, operated from modest sentries’ boxes, policemen merely looked at us, curious about our seven vehicles’ foreign number plates, before waving us on. At the larger checkpoints, whose buildings shade beneath vaulted concrete roofs similar in appearance to motorway tollbooths, officials demanded to see passports and vehicle documents and questioned where we were going and why. The expedition’s unflappable Russian/Uzbek-speaker, Arthur Sebazungu (a German national whose mother is from Russia and father from Rwanda), smoothed the way with officials by explaining the purpose of our journey and its unlikely destination.

At one check, entering a mountain pass close to the Kyrgyzstan border and patrolled by the army, a policeman already had on his desk a document listing our seven vehicles’ registration numbers, our names, and our passport numbers. The State knew where we had been and where we were supposed to be going. We were watched from a few yards away by a group of baby-faced soldiers in camouflage uniforms with Kalashnikovs strapped diagonally across their chests. The only audible response from one, when we issued a friendly greeting, was the hard metallic click of his gun being cocked.

At another check, on the outskirts of Uzbekistan’s capital city Tashkent, we were instructed to switch-off engines and stand by our vehicles while our documents were taken away from us. A policeman wearing a bullet-proof vest and carrying an automatic weapon hovered behind us, accompanied by a solid ox of a man in black trousers, black T-shirt and black shades hiding the work of his eyes. This is a country with a busy Secret Service.

The people in Uzbekistan not dressed in uniforms couldn’t be more different. Everywhere we met Uzbeks – at the roadsides, in a big fruit and vegetable market, in a silk factory, in small shops, in the labyrinthine streets of the walled cities of Khiva and Bukhara on the old Silk Road – they were warm and friendly and eager to talk.

To be fair to the customs official who had questioned my mental state, it quickly became apparent that she asked daftly offensive questions only because she had to, not because she believed in their worth. When she demanded to look at photographic images stored on mobile phones and laptops, a request anyone from a western democracy would rightly consider an unacceptable intrusion of privacy, what she was really searching for was a more complete personal picture of the western way of life. As the members of our expedition team passed one-by-one through this customs exit post, we revealed pictures of the sort of homes and cars and holiday destinations that people in this part of the world can only dream of.

When finally permitted to leave Uzbekistan, I carried with me in my head through customs two lasting impressions: the charming Arabic character of the ancient walled cities of Khiva and Bukhara, and the fact that authoritarian regimes operating in the interests of the people in government, and not the people they govern, tarnish their nations with a reputation for hostility that their people don’t deserve.