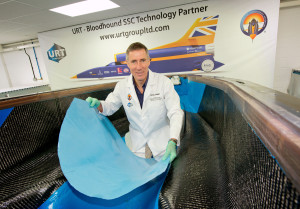 URT Group designs and manufactures composite parts and structures for hi-tech industries including defence, motorsport, automotive, and aerospace. On behalf of URT, in my role as Account Director for an automotive PR agency, I planned and implemented multi-channel marketing communications campaigns. These integrated business-to-business PR and social media activity, e-newsletters, website content generation, and print advertising.

Many of URT’s clients operate in secretive industries and demanding environments, from F1 race tracks to theatres of war. The nature of this work often prevents the company from talking about it. One exception was URT’s appointment as a technical partner in the Bloodhound SSC land speed record project. URT has constructed the carbon fibre monocoque and other bodywork components for the Bloodhound car, which is aiming to reach 1,000mph. Bloodhound will be driven by RAF fighter pilot Andy Green, the same man who set the current land speed record of 763mph in Thrust SSC in 1997.

URT’s PR and marketing communications were primarily business-to-business, but the Bloodhound project was also an opportunity to generate positive regional media coverage in West Sussex, raising the company’s profile to help its ongoing recruitment efforts as one of the area’s largest employers.

As the angle for a wider-reaching story, I recommended that URT request a site visit from Andy Green, with time allocated to media activities; arranged for photographer Jim Holden to take photos of Green’s visit, for distribution to media and for use on URT’s own digital channels; requested permission from Bloodhound to provide media with computer-simulated video footage of Bloodhound at high speed; and proactively approached media with a background briefing.

On the day of Green’s visit, we photographed him applying a layer of carbon fibre to Bloodhound’s cockpit, with URT’s logo visible on his clothing and on backdrop artwork. Visiting media, including photographers and TV crews, were given access to Green in the same branded workshop setting. The story achieved prominent coverage in key engineering and business media in print and online, in URT’s two regional newspapers, on BBC and independent regional radio stations, on the BBC News website, and on the evening and night-time regional news programmes of both BBC TV and ITV. This coverage precipitated a surge in visits to URT’s website.