The East Sussex Energy Partnership encouraged homeowners to install energy-saving measures such as loft insulation and solar panels. Run by Climate Energy Ltd on behalf of four local authorities, the Partnership publicised the availability of government-funded grants to help pay in part or in full for these measures.

I lead PR for the East Sussex Energy Partnership in my role as account director at marketing communications agency PRG. The objective was to gain publicity through regional print and broadcast media, driving people in the Partnership’s area to visit its website and sign-up for installations.

The PR challenge was to tell the stories about two types of rather dull technical hardware – rolls of insulation and rooftop panels – in a way that had media appeal. The solution was to hold two media photocalls, capturing the essence of each story in a quirky photograph. 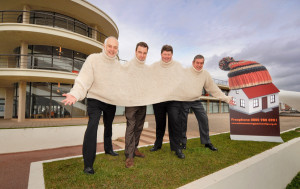 To publicise the key messages for the insulation offer – insulation, warmth, four Local Authorities working together – the four Council leaders were photographed together sharing a specially-made four-person woolly jumper, outside one the region’s landmark buildings. A later press release, commenting on the arrival of Britain’s coldest weather in years, generated further media coverage.

Each of the authorities – Eastbourne, Hastings, Rother and Wealden – received radio and newspaper coverage reaching 135,000 people, with an advertising equivalency value of more than £17,000, for a total cost of less than £2,300.

To summarise the solar panels story in a single image, we involved a local celebrity synonymous with sunshine and showers, TV weather forecaster Michael Fish, and photographed him soaking in a warm bubble bath surrounded by sunflowers. In another shot, to additionally tell the story of the Local Authorities working in partnership, the four Council leaders were shown gathered around Fish’s bath. These images were so distinctive that they not only gained extensive regional media coverage, but were also published by The Guardian and The Daily Telegraph, and shown on the BBC TV programme ‘Have I got News for You’.