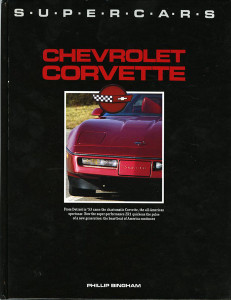 Salamander Books (now part of Pavilion Book Group) earned a fine international reputation for publishing authoritative, well illustrated books about aviation, military history, and motoring. Salamander’s Supercars series told the stories of the creation, development, and driving characteristics of some of the world’s most glamorous sports cars, made by Chevrolet, Ferrari, Lamborghini, Lotus, and Porsche. I was commissioned to write Supercars: Chevrolet Corvette, a 40,000-word, 68-page large-format book which sold 65,000 copies across Australia, Canada, Germany, Italy, the UK, and the USA.

Other titles in the Supercars series focused on cars that had been in production for one or two model generations and typically for five to 12 years. The Chevrolet Corvette, however, had been rolling off production lines for five model generations and 50 years. This demanded an extraordinary amount of historical research. I also conducted detailed background research into the current-generation car, visiting the Corvette factory in Bowling Green, Kentucky and GM’s headquarters in Detroit to interview the Corvette’s chief engineer and design studio head.

I interspersed the main narrative of the book with standalone stories, spotlighting the people behind the cars – colourful characters such as Harley Earl, the flamboyant designer who first headed GM’s Styling studio, and Zora Arkus-Duntov, the US immigrant of Russian parents who perhaps did more than any other engineer, in the two decades after World War II, to make America’s sports cars go fast and handle well.

My writing also included a photo-led story about the Corvette’s factory; text for graphics tracking the car’s annual sales, engine power, top speed, and acceleration statistics; and a double-page timeline from 1953 to the current day which charted the pace, power and popularity of America’s favourite automobile in parallel with events and pop culture of the same time.